The Hand of Faith, the largest gold nugget in the world. (Photo credit: Wikipedia)

Just what does it take to abandon family and the comforts of home?  Dreams of adventure? Fortune?  Fame?  Maybe just a dare.  Or a failure of common sense, as in buying lottery tickets?  Oops.  Not you, of course.

I guess I wouldn’t be here if it weren’t for a great-grandfather that had that something.  He sailed from Denmark and ended up in Cripple Creek, Colorado, at the right time. 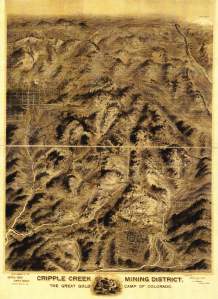 According to a great-uncle, he found a large gold nugget.  Great-grandpa also knew when to say “Basta”, enough.  (Yes, that’s Italian, not Danish.)  He sailed back to Denmark and returned with his bride.  They bought a farm in the midwest and lived happily ever after.  Actually, I couldn’t say;  I never met him.  The same great-uncle also claimed we were related to the Danish royalty.  I told my kids that even if they were princes and princesses, they still had to do their chores.  There was no one left to ask whether it was true or not.  (I wrote a novel based on that nugget;  maybe 15% truth, tops.  85% lies and imagination.  Surprising to readers which parts are actually true.)

That something seems to have been passed down through the generations, so much so that one child I’ll refer to as Intrepid.  She decided it would be fun to take a high school class that combined biology and phys ed credits, and spent a 3-day weekend in February(! ) camped on a frozen lake in the Boundary Waters on the Canadian border.

Why I looked on the internet for the weather report, I don’t know.  I saw that instead of a low of 0 degrees F, a front came through with 40 mile an hour winds and 20-something below temps.  I didn’t sleep that night. 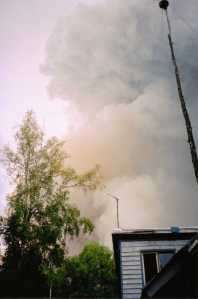 She’s also the one who phoned home one night from a trip to the wilds of Alaska to tell us not to worry about the forest fire.  She had to hang up then so the other kids could call and scare the heck out of their parents.  Not until we got her photos developed did I realize how serious it was.  Not the kind of blaze any TOTC searcher wants to run into.

I suppose I had a bit of that something as well.  Once, I went west with a friend in a VW bug to visit a former co-worker who’d moved to Colorado.

We thought we’d see the sights while there, so ended up hanging in a cable car over the Royal Gorge.  I turned to her to tell her that I was getting off, not enjoying the view while terrified, but, too late.  The door slammed shut.  At least I made it across without screaming or fainting.  Oh.  Back to the story.

Trailblazing.  I was the navigator.  I love maps.  We’d visited the Air Force Academy, been down as far as Pueblo, and wanted to get back to Denver or Boulder or somewhere.  I saw a short-cut.  It was right there on the map.  No name.  No number.  It appeared to be paved.  So, we took it.  Before long, we started seeing jeeps.  Army jeeps.  And other things.  Low buildings.  Low flying jets.  Who knows.  Soon, one of the jeeps with 2 or 3 guys in it, came up to us.  We stopped.  They asked what we were doing or where we were headed or how we ended up there.  I explained.   I showed them the map.  They gave us an escort.  I followed them right up the road I’d planned on.  Saved several miles.  I don’t think I’d be alive to mention it if it happened these days.

There were other things I didn’t mention to Intrepid until she was older, like sleeping on a picnic table in Tennessee on the way back from a Florida camping trip—different friend, spring break sort of thing.  Intrepid comes up with enough ideas of her own.  I’ve got a few gray hairs to show for it. She’s too tied up these days to venture west on a rumor of gold.  Maybe I can get an older child interested.

Surprising the reactions I get when I mention Forrest Fenn‘s The Thrill of the Chase treasure hunt.  Nobody thinks it’s real.  That’s okay.  I’m a firm believer in the Fenn formula.  Somebody’s going to find it.  And all the other TTOTC searcher’s are having fun.  (Though some of you might need to slow down…..you, know.  Basta.)